When I’m asked what I do, I tell people I am a renegade Executive Pastor and a professional Holy Mischief maker. The next question is the same almost every time, “Oooo Holy Mischief…what is that? I want to do that!” Those two words which sit in tension with one another spark a sense of mystery and excitement that leave people wanting more.

The truth is that “Holy Mischief” is something that God has been nudging me towards for 14 years. In 2006 I was appointed to assist my good friend Rev. Allan Todd with starting a new church. One of the core values that he wanted to instill in the DNA of this church was service or servant evangelism. His vision was to do AOK projects ,or Acts Of Kindness projects, regularly to let people know that they are loved. Allan had a special way of making life fun and he made people feel like they mattered.

Watching the Spirit at work:

I had no idea what that would look like or how to get started but with the help of Rev. Blair Zant, a lot of sticky notes, a whiteboard, and a lot of prayer, we mapped out the start of what Holy Mischief could look like. The next step was to get others involved. I had a group of people at Peachtree City UMC who were on-board from the start but I wanted to connect others as well. I immediately turned to my ACE clergy group named Parts Unknown. We are a cohort of 8 clergy exploring new ways to do the work of the church. They seemed to be the perfect fit to launch Holy Mischief. I also reached out to the Fresh Expressions Bible study started by one of Peachtree City UMC’s members that meets in a Crossfit gym. Everyone was excited to hear more. 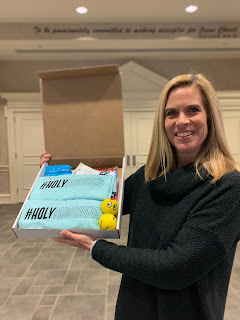 Now that I had who was going to be involved I needed to pitch what we were doing. I really wanted to tell each of them to “simply do good things.” In my head this is simple but a friend of mind told me I should never say the words “simple” or “do good” or “acts of kindness” regarding Holy Mischief again. When I asked her why she said, “because this isn’t simple. If it were simple, everyone would be doing it. There have been other kindness movements before but yours has unique components that others don’t.”

I took her advice to heart and started writing about all of the acts of Holy Mischief that Jesus did. Where did Jesus disrupt the pattern and share his love with others? And what could each of us do to model that in our own context? When I was done I had 40 different stories and 40 different challenges and we were ready to launch the Holy Mischief Lenten Challenge.  We started a Facebook group and hosted two different pop up events to get people involved. The Facebook group grew each week and we ended up with people from other states, countries, and denominations. People began doing the challenges and sharing how they encountered God in each challenge. It was exciting to watch as more and more people got involved.

Then the coronavirus caused us to shelter in place. Some of the challenges were no longer possible to do as written. It seemed like for a day or two that the Lenten Challenge was on permanent hold. But then something amazing happened, the movement began to organically grow. I’ve been told that crisis magnifies kindness and I can say its true because I saw it in real time. After we started sheltering in place, I started to see people posting stories with the hashtag #HolyMischief, where they shopped for their elderly neighbor or did a “parade” for a graduating senior once school was cancelled for the year. I saw people sewing masks for healthcare workers or having dinner catered for the local hospitals. People stopped doing challenges because they had a list in front of them, they started creating their own challenges and being the church in innovative ways.

I’m an extrovert and I HATE staying home for this long but I’d do it again if a) it keeps others healthy and b) I could see the Holy Spirit move like that again. Its truly been beautiful to see and my prayer is that it continue for a long long time.

Praying for what’s next…

What’s next for Holy Mischief? I’m praying about it. I don’t want it to become a program but rather a way of life for others. I could see more pop up events (either in person or virtual), retreats, and new challenges. In any case I can’t wait to see what’s next and where God is working.